William Arthur Stewart “Bill” Buxton‘s (1949 – ) most prominent contribution to the field of HCI was the development of the multi-touch interface, such as the trackpad on a laptop and the fully-interactive screen on iPads and other tablet computers. Buxton also contributed much of the background work to this innovation, including applying Fitts’s Law, which explains how humans judge distances to targets. For example, when a computer user moves a mouse to navigate on a screen, the distance the user moves the mouse is not a true 1:1 ratio compared to how far the pointer moves on the screen. Buxton’s work enabled optimal interface manipulation by perfecting the coordination between the physical input device, the mouse or the human hand in touch-screen devices, and the pointer within the machine.

In addition to this work, Buxton has also been a leading researcher for Microsoft, a regular contributor to Business Week, and the author of Sketching User Experiences. A dedicated supporter and contributor to the fine and performing arts, Buxton has developed several musical instruments. He is also a published author on the history of Canada.

Buxton has received SIGCHI’s Lasting Impact Award (2005) and Lifetime Achievement Award (2008), and was elected as an ACM Fellow (2008). He received honorary doctorates from the OCAD University, Queens University (Kingtson, Ontario, CA), University of Eindhoven, and University of Toronto.

“We need more Bill Buxton’s in HCI.  He started as a genuine rockstar – a real performing musician – and still gives the best performances of anyone in our field.  He offers his incredibly detailed knowledge of input devices and strategies to whoever asks a good question.  His eyes sparkle, his body moves, and Willy smiles with delight.  He believes in the power of design and has taught me and others to respect and value it.  I wish our life paths had given us more time to be together – he’s so different from others I work with and such fun!”  – Ben Shneiderman

Bill Buxton (left) and Don Norman (right) at the ACM CHI Conference on Human Factors in Computing Systems in Boston, MA on April 13, 1986. 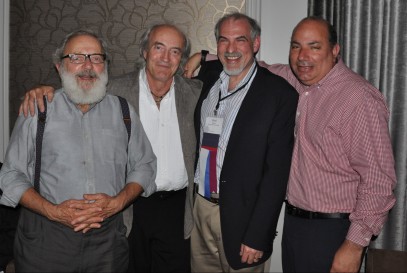 Bill Buxton describes his exhibit of computer input devices to visitors at the ACM CHI Conference on Human Factors in Computing Systems in Vancouver, Canada in May 2011.

Bill Buxton at the ACM CHI Conference on Human Factors in Computing Systems in New Orleans, LA in April 1991.