Jimmy Wales (1966 – ) is an Internet entrepreneur best known as the founder of Wikipedia, the now ubiquitous free collaborative online encyclopedia, and the Wikimedia Foundation. In 2000, Wales’ vision of “free knowledge for free minds” inspired him to create Nupedia, a free encyclopedia featuring an extensive peer-review process to ensure quality. When Wales added a collection of web pages called “wikis” to enable anyone with access to contribute and modify content, the project was renamed Wikipedia. Wikipedia’s success contributed to the rise of a trend in web development called Web 2.0, which aims to foster creativity, collaboration, and sharing among users. As Wikipedia expanded, Wales became its spokesperson and promoter through media appearances and speaking engagements. TIME Magazine named Wales one of its “100 Most Influential People” in the “Scientists & Thinkers” category in 2006 for his work with Wikipedia.

In 2003, Wales founded the Wikimedia Foundation, a nonprofit organization promoting the growth, development, and distribution of free, multilingual content to the public. The following year, Wales and Angela Beesley co-founded the for-profit company Wikia, Inc., a collection of wikis on various subjects all hosted on a single website. The World Economic Forum named Wales one of the “Young Global Leaders” of 2007, recognizing him among the top 250 young leaders across the world who achieved significant professional accomplishments and demonstrated their commitment to society and potential to contribute to the shaping of the future world. He has received many honorary doctorates and other awards recognizing his hugre contribution in leading Wikipedia.

Wales continues to dedicate his time to promoting free speech and Internet freedom through speaking engagements around the world. When describing his work, he has said, “Imagine a world in which every single person on the planet is given free access to the sum of all human knowledge. That’s what we’re doing.”

“While Jimmy Wales is not really an HCI researcher, his development of Wikipedia has had an enormous impact on user experiences.  I’ve greatly admired his thoughtful work over the past two decades in developing the energetic Wikipedia community with its devotion to giving free access to the world’s information to all people in their own languages.  The Wikimania conferences produced among the most enjoyable professional encounters I’ve had, with devoted contributors eagerly sharing their ideas and working through the challenges of making Wikipedia even more successful.” – Ben Shneiderman 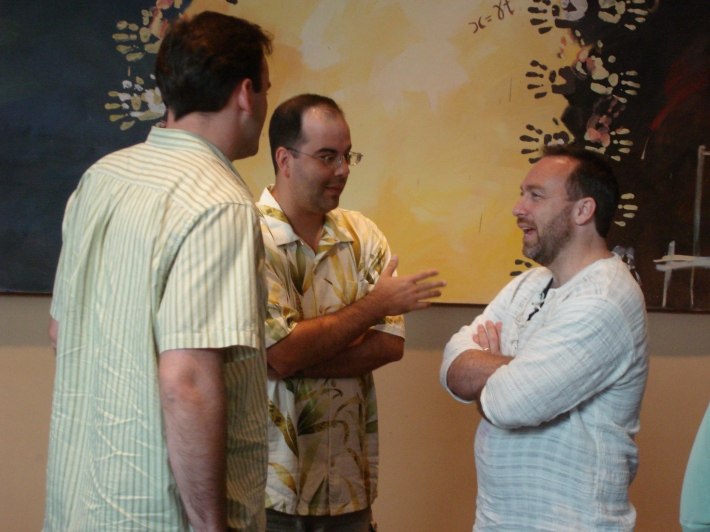 Wales talks with colleagues at Wikimania 2006, the second annual international Wikimedia conference, at the Harvard Law School campus in Cambridge, MA in August 2006. 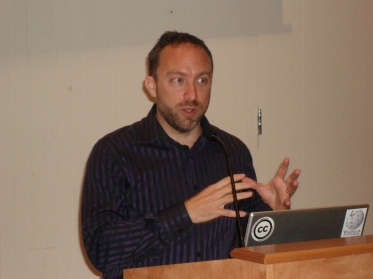 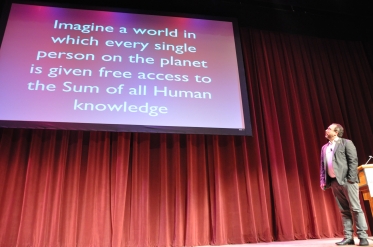 Wales presents at the Wikimania 2012 conference at George Washington University in Washington, D.C. in July 2012.