At the University of Calgary, the work by Greenberg and his talented crew typifies the cross-discipline aspects of Human Computer Interaction, Computer Supported Cooperative Work, and Ubiquitous Computing. He and his team are well known for their development of:

A prolific author, Greenberg has written and edited several books and published many articles. Researchers and educators in the field benefit from Greenberg’s commitment to ensuring that his tools, systems, and educational materials are readily available. In addition to his academic work, Greenberg has consulted for various companies as an Expert Witness in matters involving patent infringement.

Greenberg was elected to the prestigious ACM CHI Academy in April 2005 and was inducted as an ACM Fellow in 2013 for his contributions to computer supported cooperative work and ubiquitous computing. He received the Canadian Human Computer Communications Society Achievement Award in May 2007, the ACM UIST Lasting Impact award in 2015, and the Canadian Digital Media Pioneer Award in 2018.

“Saul Greenberg’s early and consistent devotion to building HCI excellence is clear in his work on physical devices, collaboration, tool kits for rapid prototyping, and evaluation methods.  The diversity of his work is impressive, combining diligent data collection and innovative implementations all guided by appropriate theories.  I’ve always enjoyed my times talking with Saul, especially skiing behind him to admire his graceful style.  His cheerful can-do personality is appealing. Saul is one of those exceptional people who I wish I could spend more time with.” – Ben Shneiderman

Saul Greenberg and Mildred Shaw at the ACM CHI Conference on Human Factors in Computing Systems in New Orleans, LA on April 27, 1991.

Saul Greenberg dines with Gary A Chappell, Chris Ahlberg, and Brad Myers (left to right) at the ACM CHI Conference on Human Factors in Computing Systems in Boston, MA on April 24, 1994. 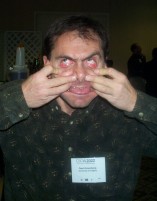 Saul Greenberg makes a silly face for the camera at the ACM Conference on Computer-Supported Cooperative Work (CSCW) in Philadelphia, PA on December 2, 2000. 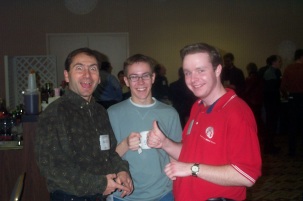