Robert Kraut (1946 – ) is a social psychologist who dedicated his career to research and education on human communication and the impact of computing. His five major research areas include online communities, everyday use of the Internet, collaboration in small work groups, technology and conversation, and computers in organizations. Kraut teaches courses in these areas as a Herbert A. Simon Professor of Human-Computer Interaction at the Human-Computer Interaction Institute at Carnegie Mellon University. He was previously a professor at Cornell, Princeton, and the University of Pennsylvania.

During his early academic career, Kraut conducted basic experiments in nonverbal communication that experts continue to cite today. While working with Bellcore, Kraut studied informal group communication in the workplace and established far-reaching methodologies for studying collaboration. Kraut joined the faculty at Carnegie Mellon University in 1993. As the Internet rapidly expanded in the mid-1990s, Kraut initiated a program of studies on the impact of the Internet in the home on the well-being of its users. His longitudinal studies followed new users over months and years. Kraut’s systematic scientific approach to observing social effects transformed the methodology for investigating social phenomena and continues to influence the way people both in the field of human-computer interaction and outside the field think about the social impact of technology.

Kraut’s most recent research has focused on the analysis and design of online communities, including Facebook, health-supported communities, guilds in multi-player games, and Wikipedia. Facebook brought Kraut in as visiting faculty in 2013.

Kraut was elected to the CHI Academy in 2003 for “cumulative contirbutions to the field, influence on the work of others, and development of new research directions.” He is a fellow of both the Association for Psychological Science and the Association of Computing Machinery (ACM). Kraut received ACM SIGCHI’s Lifetime Achievement in Research Award in 2016.

“Bob’s deep knowledge of social psychology and his strong analytic mind always won my respect and attention.  His cleverly designed experiments teased out what works and what doesn’t for small collaborations and large communities.  His book ‘Building Successful Online Communities: Evidence-based Social Design’ (2012, with Paul Resnick) provides clear advice for community designers and researchers. Bob is one of the people with whom I wish I had been able to spend more time.” – Ben Shneiderman

Kraut with Rob Kling at the Social Sceince Research Conference in Philadelphia, PA in May 2001. 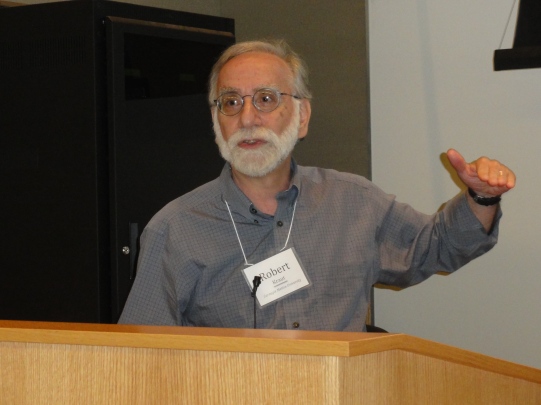 Kraut speaking at the National Science Foundation workshop on Social Computing at the University of Minnesota on June 11, 2011.