Hiroshi Ishii (1956 – ) is the creator of the Tangible User Interface, which allows a user to interact with digital information in non-standard ways. Ishii first described the concept in his paper “Tangible Bits.” Moving beyond the ubiquitous keyboard and mouse, TUIs seek to allow the manipulation of digital information through physical modules, making the ‘bits’ more open to direct manipulation and opening a variety of information types to users.

Ishii’s continued research in the area has led to the Radical Atoms, an as yet theoretical successor generation of Tangible Bits that are themselves changeable and, according to the Tangible Media Group, would become “as reconfigurable as pixels on a screen.” He received the ACM CHI Lifetime Research Award in 2019.

“Hiroshi’s energetic smile and intense presentations promoted tangible computing ideas at MIT and beyond.  His vibrant demos and videos opened the door to the physicality of user interfaces.  I like his enthusiasm and his fresh ideas, and we share an interest in taking photos of our colleagues.” – Ben Shneiderman

Hiroshi Ishii at Stanford University, Palo Atlo, CA in May 2008.

Hiroshi Ishii and Roz Picard at the MIT Media Lab in 1998. 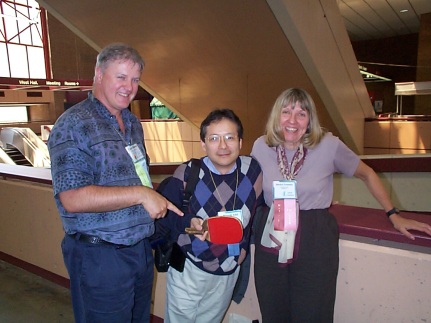 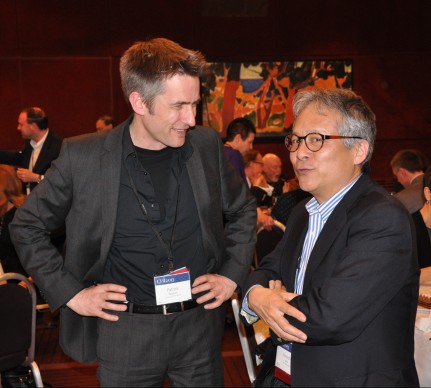 Hiroshi Ishii with Patrick Baudisch at the ACM CHI Conference on Human Factors in Computing Systems in Paris, France in April 2013.

Hiroshi Ishii at the ACM CHI Conference on Human Factors in Computing Systems in Toronto, Ontario, Canada in April 2014.