Doug Engelbart’s (1925 – 2013) most prominent contribution to the field of Human-Computer Interaction was the invention of the computer mouse, for which he held the original patent.

Engelbart rose to prominence in the 1960s, when he gave what has become known as the “Mother of all Demos” at the 1968 Fall Joint Computer Conference in San Francisco, CA. During this presentation, Engelbart demonstrated the oN-Line System, which featured many of the elements prevalent in modern computing, including the use of a mouse and keyboard for efficient navigation and input, video-conferencing, multiple windows, and collaborative work functions. Engelbart’s vision was to shift the focus from the computer to the user, making the screen, keyboard, and mouse as important as the circuits and storage.

His visionary designs in the 1960s played a key role in the emergence of the personal computer and the rise of user interface research. Engelbart was especially interested in collaborative work and created the Bootstrap Institute in his later career to spearhead efforts to do better work through increasing the “collective IQ,” an idea that has come to fruition through the ready availability of services such as Google’s shared drives and Web 2.0.

Doug Engelbart was an early hero who promoted intelligence augmentation (IA) in place of artificial intelligence (AI). His efforts to help knowledge workers be more effective led to his historic demonstration in 1968, in which he showed a large wooden mouse for pointing, chord keyboard for text entry, file sharing, and collaborative methods such as video conferencing. We met in 1985, but my first discussions with him were at the 1987 Hypertext conference.  My 1998 encounter with Doug, when he received the first Lifetime Achievement Award at the ACM SIGCHI Conference, was especially moving. He tearfully told me that he greatly appreciated the recognition, which helped soothe the pain he felt because his human-centered work had been fiercely opposed by those who advocated machine-centered models. His gentle soft-spoken style and personal vulnerability was very different from most other HCI Pioneers.  The happy outcome was that as his work became widely known; he received worldwide acclaim. – Ben Shneiderman

Doug Engelbart (left) and Allen Newell at the CHI Conference on Human Factors in Computing Systems in San Francisco, CA on April 14, 1985. 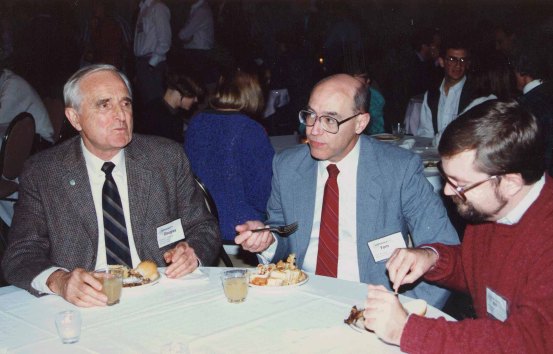 Doug Engelbart with colleagues at the Hypertext 1989 Conference in Pittsburgh, PA.